Well y’all it’s been a year since I last posted here.  When it comes down to it there wasn’t a lot to report on honestly.  I spent last fall in TX completing my final internship so that I could finish paramedic school.  By early December I had finished all the tests and details I needed to take me national exam, and I passed!  Oh it felt so good, because, I can’t lie the NREMT Paramedic exam is dang hard.

After that I worked most of the spring at a clinic in Soldotna before being offered (and accepting) a seasonal paramedic position with the Bristol Bay Borough Fire Department, which is where I’ve now been since late May.

Today I thought I’d go ahead and give you guys a little snapshot of my surroundings out here.

Bristol Bay…Bristol Bay… how do I describe Bristol Bay?  Picture Alaska in your head.  Whatever you think Alaska should looks like.  Got it?  Ya Naknek (the town I live in) looks  nothing like that.  If I squint real hard on a clear day with no haze I can see the mountains in Katmai about 50 miles away.  Naknek itself is tundra as far as you can see. Tundra meaning flat boggy low bush plant life with little to no trees. 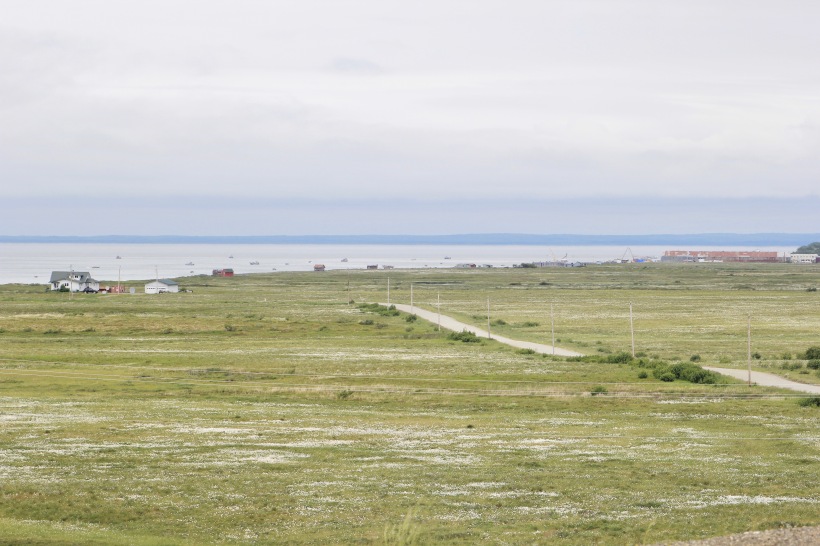 Tundra leading up to the bay.  You can see the Peterson Point Cannery in the distance to the right.

But people don’t come to Naknek to play tourist, they come here to fish.  With about a dozen canneries in town the population swells from less than 1,000 to over 10,000 for the Salmon fishing season, hence why they hire people like me to help out in the summer.

The Bristol Bay Borough Fire Department (henceforth referred to as BBBFD) actually only has one full-time year-round paid employee, my supervisor Deb, whose official title is EMS Coordinator, but she really does everything.  Everyone else with the department is a volunteer.

There are three fire stations.  One in Naknek, another in King Salmon, and another in South Naknek (which is only accessible by boat or plane), but almost everything is run out of the Naknek station. 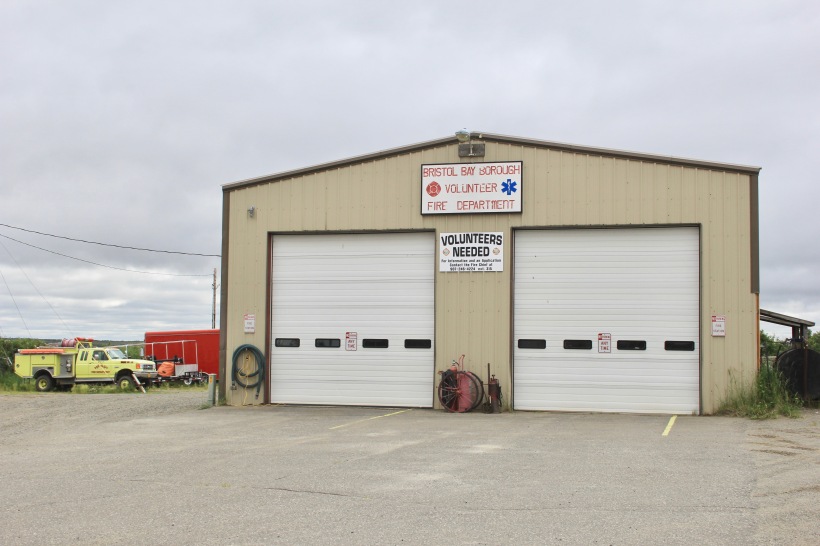 The Naknek Fire Station.  It isn’t big, but don’t be fooled, there can be 5 different apparatus squished in there.

The town doesn’t have a hospital but it does have a decent clinic, so if you’ve got a cold or cut your finger they can handle it, but anything worse and there’s a good chance you’ll get medevac’ed to Anchorage from the airport in King Salmon, and expensive event ($30,000+) if you don’t have medieval insurance.

While we actually have 4 ambulances in the area, our primary rig, Rescue 1 is kept in a “barn” next to the clinic and our bunkhouse, which is about a mile from the fire station.  This way we can have access when we’re on call (during the work day we just drive it to the station).  Currently we also have our Reserve Ambulance, and the oldest in our fleet, parked out front as well.  We typically only use it if we have two calls/patients come at the same time, which has happened twice since I got here.  I personally had to run one call in it just last week, and well, it was interesting.  A blast from the past. The ambulance barn with Rescue 1 inside. 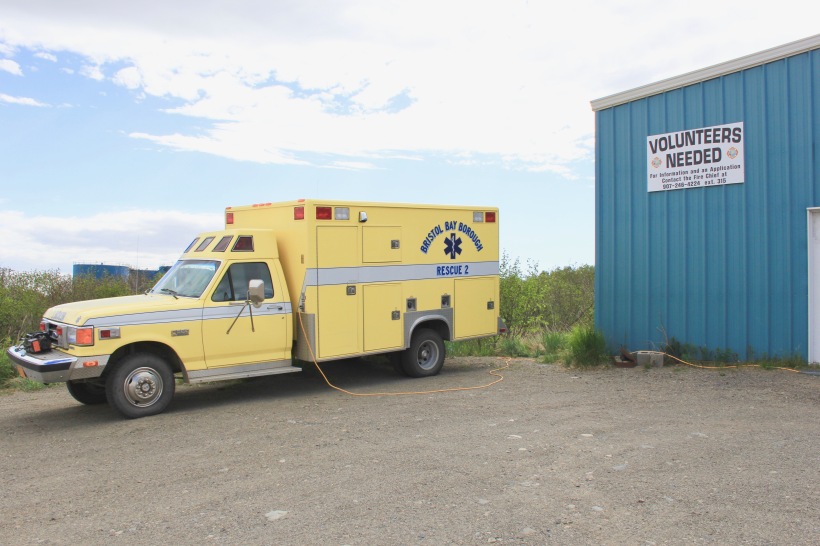 Our reserve ambulance parked outside.  That thing is at least as old as me. 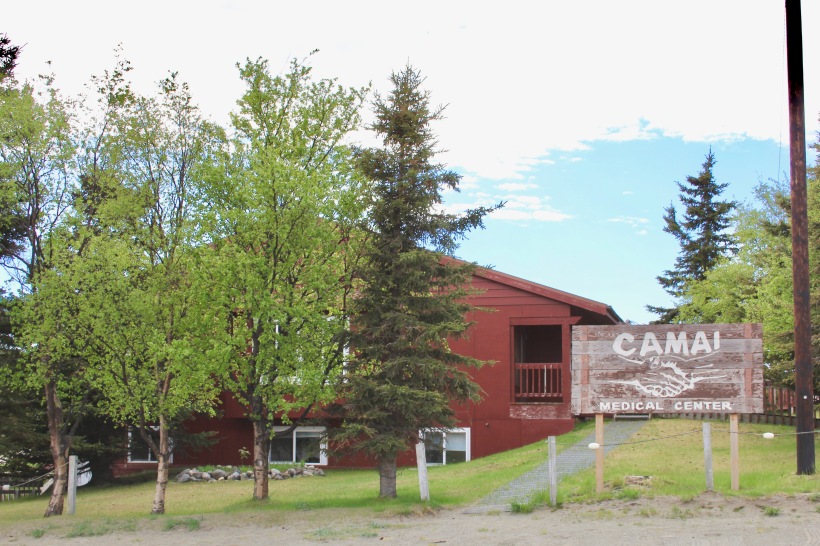 Our clinic, the Camai (pronounced Chuh-my) Medical Center, which is about the size of your average doctors office.

Behind the clinic is the Fire Departments bunkhouse, which me and my two coworkers stay at,  although right now we also have a seasonal police officer, a parks dept. intern, and the engineer working on the towns sewer project living with us as well.  All in all the bunkhouse is a pretty nice building.  There’s a guys wing and girls wing with 4 bedrooms each and a bathroom. Then in the middle there’s a living room, kitchen and laundry area.  There’s not a whole lot to do in our down time, especially since we’re on call 5 nights a week, so we’ve been watching a lot of movies and playing a lot of board games lately.

There’s also a lake right next to the bunkhouse which has some pretty killer sunsets over it.  I’d actually have a pretty awesome view of it too if I didn’t have that garish yellow  connex right out my window.  You win some you lose some. 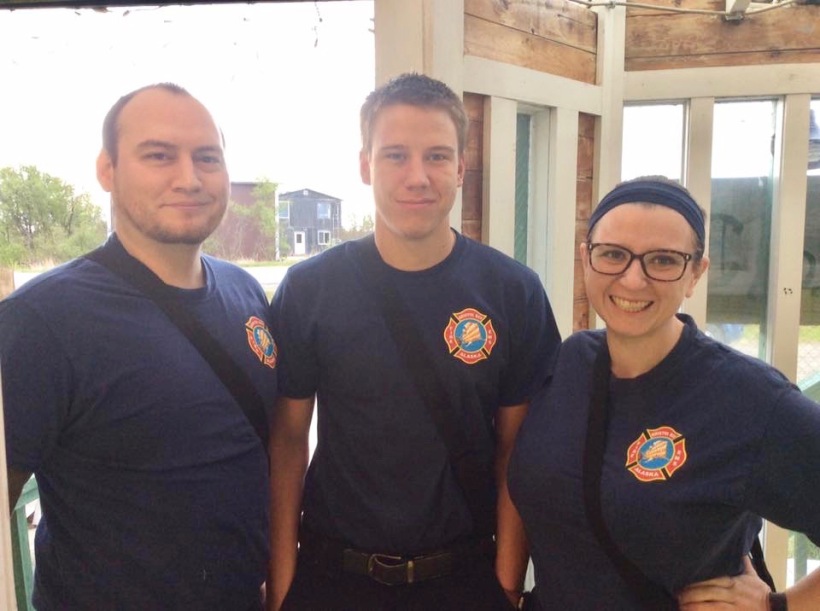 L-R: John, a paramedic from Texas, Nate an EMT 2 that actually volunteers with me at the fire dept back in Soldotna, and then of course me!  I should also mention that this picture was taken by the Heart ‘o The Shire, a coffee shop/cafe (I guess you would call it that) here in town that has THE BEST cinnamon rolls.  Just sayin 😉 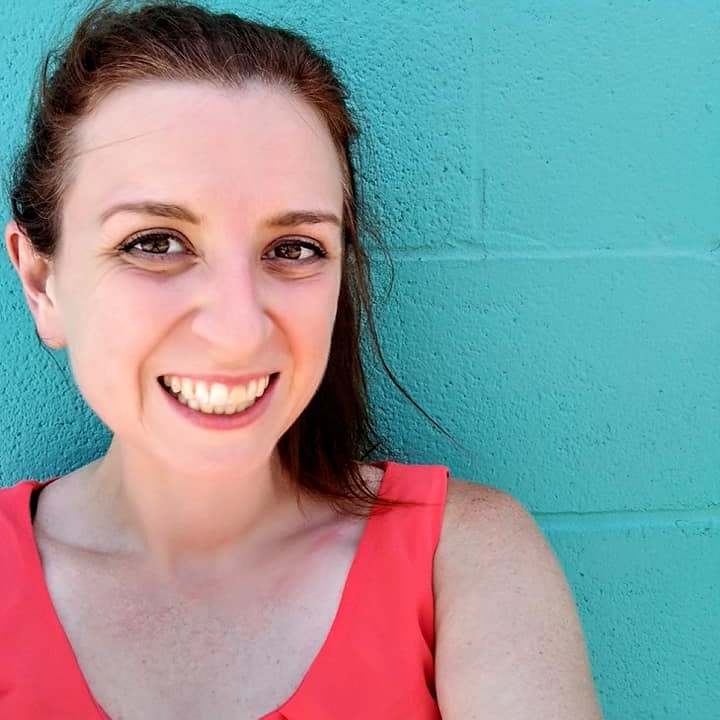